New York has been top of my bucket list for a long time. I wanted to see places where you felt like you had walked straight into a movie. I wanted to try all of the foods. I wanted to explore and get a real feel of the city. I finally went to New York this May and it really did deliver. 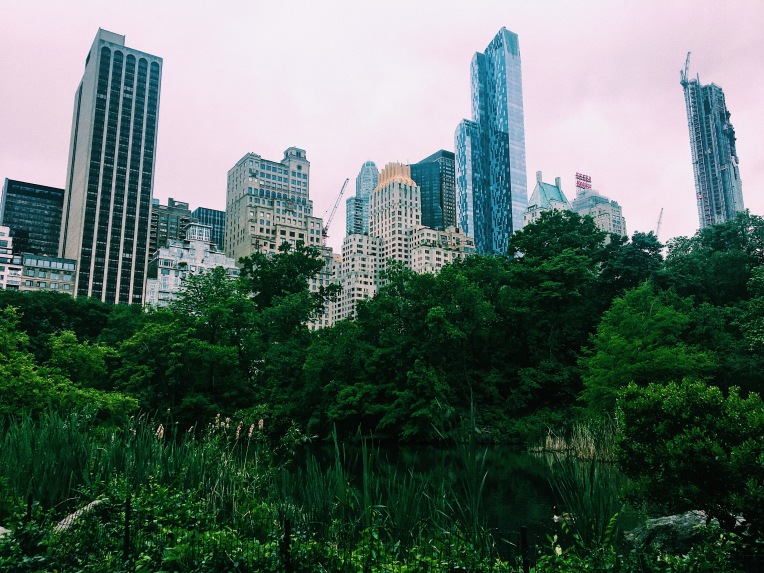 New York is so busy! If you aren’t used to that then it can be a little overwhelming. Hell, I live in London and I found it a little overwhelming! The constant people and crowds can make the place feel like a whirlwind but there are little areas of calm if you look in the right places.

Despite the fact that I loved the sights, the food and a lot in-between. I have some issues with New York. Everyone gives New York this idea of glamour but it ‘s all like that! You also get told to do so many things from so many different people it can be hard to figure out what you actually want to do. It’s like you’ve done it wrong when people asked why you didn’t end up somewhere!

I was so excited to get to our Air Bnb when we hit NY! We got the Air Train from JFK through the airport and got off at the wrong stop. This meant we got the subway through Queens, with suitcases and standing out like a sore thumb. It was not the nicest experience and I was pretty freaked out. We then got off at our Subway stop and it was a real eye opener. I imagine all of Brooklyn to look like Shoreditch but once you get there, you notice it is not like that everywhere. It felt like you walked right into the 90s with people shouting insults at each other, boomboxes on shoulders and homeless people on street corners. There was a definite case of us thinking “where the fuck are we?”

Once we walked nearer to our Air Bnb, I felt a lot more comfortable. I know that there are dodgy and safe places in most cities but New York was one of the few places I have been worried when wandering around certain parts. You can tell it was a case of gentrification as Williamsburg was exactly how I expected it to be and I loved it. We stayed in Bed Stuy which had good bars and restuarants but it was a little more sparse.

I don’t want to knock the holiday I had. On the contrary, I loved my time in New York. However, I found myself explaining my holiday with a few “buts” and I felt guilty. It got me thinking, why should I be feeling guilty? You don’t have to love every single part of a city. It is ok to have down sides to a place. I think people sometimes look at holidays with rose tinted glasses as you aren’t going to love everything you see and do! I refuse to feel like the odd one out as everyone I speak to about New York agrees with some of the downsides once you get chatting about what you got up to.

New York has great things I loved and I will be going back. I also know what things I am definitely going to be doing again and other things I wouldn’t. Would you say the same about London? Probably. It is all about picking the best parts for you, not what everyone else tells you to go to.

Brighton is one of my favourite places to spend a weekend. Myself and my boyfriend decided to stay overnight and get out of London for a while. Although I love living in the capital, it can get quite overwhelming and it’s nice to get out of it every now and again.

After a £5 train journey from Victoria, we were in Brighton in just over an hour. That’s right, it takes just over an hour to go from London to the seaside. When you head down from the station, the air feels crisper and being able to see the sea is wonderful!

Wandering around the lanes is an absolute must when in Brighton. Walking around the winding streets, window shopping and popping into some great shops. Berts Homestore is full of all the household and kitchen items you can think of! I usually wander into Art Republic and gaze longingly at the art too.

Boho Gelato is a must for all ice cream lovers and those with a sweet tooth. I first heard about it after seeing things online from a few people (one of those people might have been Zoella). With lots of vegan options and an odd variety of flavours, it’s a nice change from the ordinary. I always go for the carrot cake. It’s delicious and has lots of cinnamon in it! My boyfriend had munchies which was full of chocolate and peanut. Eating ice cream near the pier and the beach brings back so much nostalgia of being a child at the beach!

The one thing you will probably come to find when reading my blogs is that I love to travel. Going around Europe and exploring with my boyfriend is one of my favourite things. On the 2nd of December, we headed to Amsterdam.

It was my first time going to the city and I was excited. After what seemed like the most seamless and short journey (the flight was about 45 minutes), we were there!

The first thing I noticed about the city was how many people spoke English. At first, it was odd to think we were actually out of the UK. We got on a train from the airport to the centre, watching the low buildings go past. It is odd, being from a city with such tall buildings, to not see any at all!

It is a very odd sensation to walk around constantly smelling weed. I mean, come on, I live in East London, of course I get a whiff now and again but yeah, it was odd. We walked along the busy streets and I took it all in a little bemused for a while to get my bearings.

Amsterdam is truly beautiful. I couldn’t get enough of the scenery and the canals. My camera roll was pretty much full of photos with the light reflecting the water. The buildings were so varied and when walking across the city, we saw the most amazing houses. 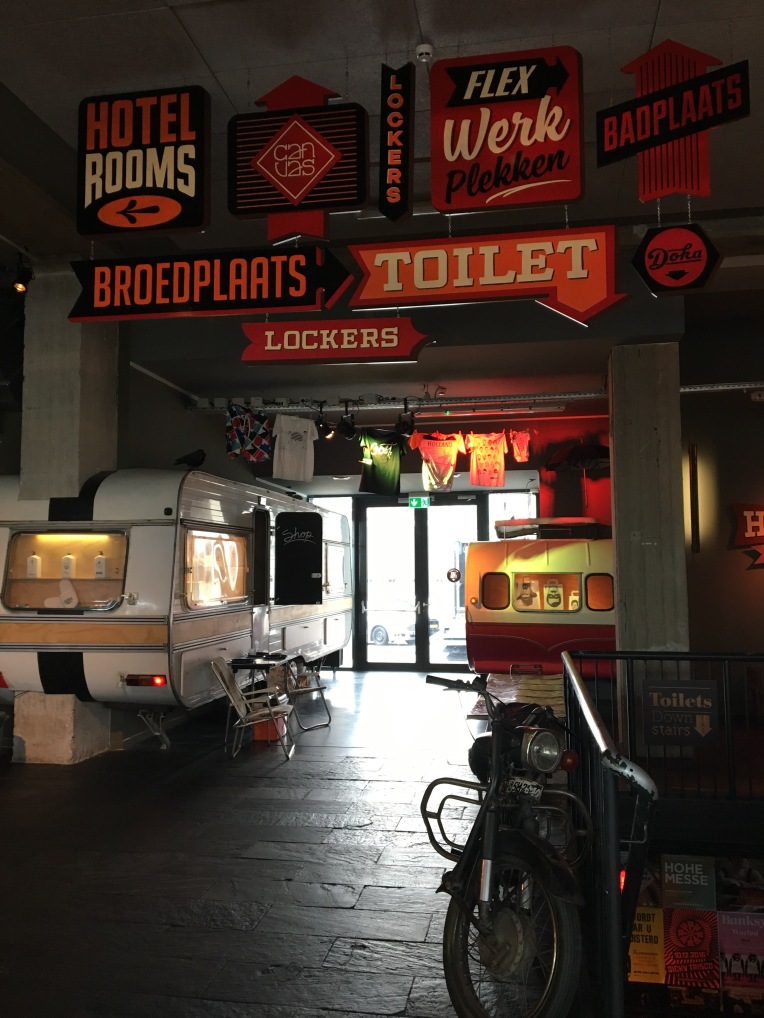 We stayed in Volkshotel, in Amsterdam Oost, basically the coolest and most reasonably priced place to stay. Oost is a little bit like the Hackney of Amsterdam. It was perfect for us as it meant there were cool places to explore, great bars and restaurants in walkable distance and wasn’t far on the train to the centre. The hotel also had a nightclub on the top floor, a cocktail bar in the basement and a bar in the foyer!

We went to this great bar on the first night called Bar Bukowski. You could tell it was full of locals with a great atmosphere. We then went to a restaurant called Smokin Barrels, home of the 2nd best burger in the world!

On the Saturday we headed out for Brunch. Living in London, brunch is a regular occurrence, so I always jump at the chance for eggs and coffee. We went to a place called The Breakfast Club (not connected to the ones in London). We sat down with omelettes, coffee and juice and planned the rest of our day!

We headed to the Museum district and went to Moco Museum for the Banksy & Warhol exhibitions. Amongst the massive buildings, it was almost like a stately home! It was incredible to see so much work from Bansky in such a small place. There was a mixture of street art as well as art on canvas. The best part of it was the Squad car which was outside and showed a huge variety of work with political context. 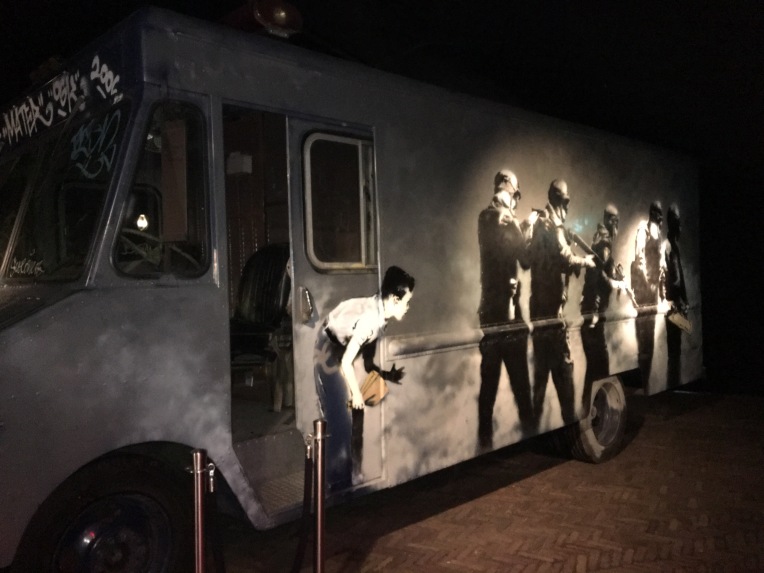 We did a lot of walking in Amsterdam. We stopped off at a coffee shop called Screaming Beans, famous for their coffee. I would definitely recommend it for anyone in need of a decent cup of coffee.

Another recommendation I would have for anyone going to Amsterdam is looking up the asian restaurant Happy Happy Joy Joy (there are a few you can go to). Small plates of asian dishes are always a good shout and this was no exception. There were delicious duck dumplings that were some of the best I have ever tasted! 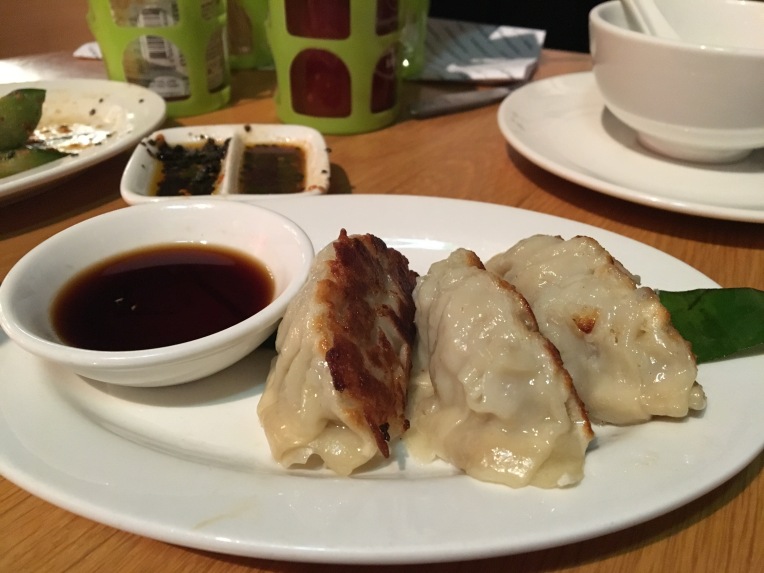 We then headed to the Red Light District. We had briefly walked through it in the day time and I found it a bit much. The whole idea of it and seeing the girls so up close made me feel incredibly uncomfortable. I then felt even more uncomfortable seeing men leer over them and take selfies by the windows. I don’t know, it was just a bit weird! You could also tell that there had been a decline so maybe if you go to Amsterdam in 10 years then the Red Light District might look very different.

Overall, Amsterdam has been one of my favourite city breaks by far. I always measure it on if I would want to live there. With the great food, culture and scenery, it is a definite yes. I can’t wait to go on a new adventure!